Welcome back to another Mad Cave’s Creator Spotlight! This time we’re highlighting Christopher Sebela, the writer of our upcoming crime drama, Pantomime.

There’s a lot of crime elements in your writing, what draws you to that world?

I think because crime is a big part of our world, but it’s usually really abstract, stuff we see on the news or hear about second hand. But it’s happening all the time around us in big and small forms and, if we’re lucky, most of us have nothing to do with that world until it forces its way in. Characters interest me the most when it comes to writing and crime lets you see what people do when they’re in the thick of the stress and fear and paranoia of pulling heists or avoiding the cops. It’s like a magic mirror that reveals who people really are underneath it all.

What would you say are your biggest influences in writing? Anything in particular help influence your writing for Pantomime?

I don’t know if I can pin it down to a handful of things. I’m a big reader, comics and prose, fiction and nonfiction in equal amounts, and along with movies, tv, games, it all gets taken in and mixes up. Some stuff is just fun and in the moment and some stuff sticks and eventually enough stuff sticks together? I’m really bad at this, honestly. I could rattle off people and things I love but I don’t know that they’re as influential as the stuff I’m consuming and turning over in my head. I have been a crime nerd for a while now, so I had a big library of stuff in my head to flip through. Maybe the most influential was a French film called RIFIFI, which has a 30 minute heist scene in complete ambient silence, no music or talking, and it popped into my head right away when I started working on Pantomime.

How did you approach the story of Pantomime? Were you expecting to do something that hadn’t been done in comics before when you sat down to write the script?

I’d never be arrogant enough to think that I’m going to do something never done before in comics, and I don’t know that I’m the kind of writer that can approach a book with lofty intentions like that and actually pull it off. If I ever do, It feels like something that happens in the process. For Pantomime, it was the same way I do all my stories: sitting down and figuring out who our characters are, what their lives were like before we meet them and a few things that make them tick, then building the story for them to walk around in. I knew a lot going in but I also kept a lot of it unknown, because I like the process of learning about these people you’ve made up as you go.

In all your years of writing, what’s the most challenging aspect of it for you? Was there a new challenge for you when writing Pantomime?

The challenge for me in writing Pantomime were the usual kinds of challenges of figuring out the small pieces, the plot and story points, how to pace it all out so it moved smoothly and each issue gave the reader a full story inside this larger story. The most difficult aspect of any writing for me is trying to make everything fit together in a way that feels satisfying to me. I overthink and over outline and tinker endlessly with everything to make sure it all makes sense and is grounded and it’s a lot. So, with this book and probably every one I write after this, it’ll be my burden to shoulder, because it’s still a better curse than being bad. 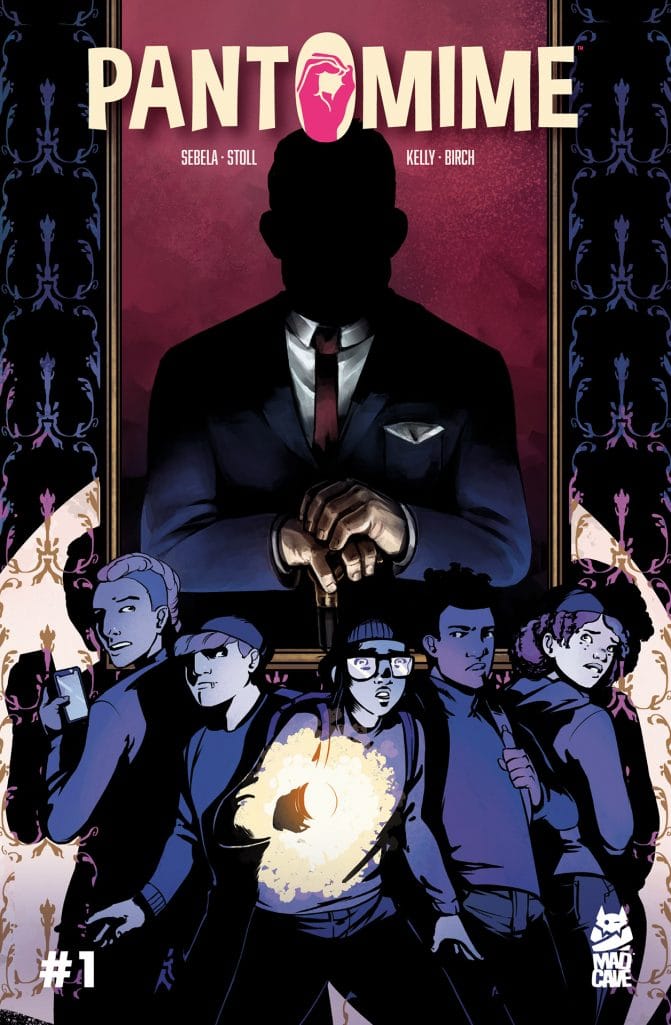 Pantomime is a wordy book, despite no dialogue being ‘spoken’ between characters, how much research went into writing?

I’m a very chatty writer, both the kind that happens between people and the kind inside a character’s head. Even when I try to pull back, it’s my own curiosity that makes me get all wordy. So I never approached this book with different intentions, our characters still speak, probably more than most people because they’re kids in high school, they just converse in american sign language.instead of spoken english. I did a fair bit of research in preparation for writing this,

Early responses to the book have been positive, were you scared with how readers, especially those with hearing disabilities, would respond?

I’m always scared of how people will respond to anything I’ve written. The downside of being my own harshest critic is I’m always braced for the worst and the upside is I get a lot of pleasant surprises when a book comes out and people connect to it for all the reasons I was hoping and a bunch of reasons I never even thought about. I was definitely nervous about how the Deaf community would react, but I set out to tell a story that didn’t treat deafness as either a curse or some magic gift, it’s just another aspect of who our characters are. We tried to just make them as real as we could and hopefully we succeeded in the eyes of everyone who reads it.

What would you say to new comic readers, within the Deaf community, who are picking up Pantomime?

To me, comics is such a singular medium for storytelling. It can do things that no other format can and it can do them in ways you never thought you could tell a story. Any story is possible in comics, from the superhero stuff that everyone knows about to romances, crime stories, fantasies, autobiographies, whatever you can think of, someone’s done it or is doing it. I guess I’d say that if you like Pantomime, there’s so many great comics out there for you to read after this. A huge library of them from the past and great stuff coming out right now. It’s all super exciting and I tend to sound like a cult member when I go on about it very long. But I still haven’t convinced my mom to read all my books, so I’m a better writer than salesman.

She had to have surgery a little while ago which freaked me out, because this is my first dog and I’m a nervous parent, but even with that, she has the best life possible and it’s all completely normal to her. I work from home and have since I got her, so she gets walks and backyard access and treats all day long. But she’s really gotten me through this cursed year and makes it so I have to leave the house and go on walks. So we kind of take care of each other like that. But she’s definitely got the better end of the deal.

Are there any other stories you would like to tackle in the future? Any big plans coming up?

There’s tons of stories I still want to tell, lots of them already in some kind of development. I never thought I’d get inside the gates of being an Actual Writer and now that I’ve wedged myself between them, I’m eager to tell as many stories as I can. I’ve got romance, sci-fi, fantasy, horrror, more crime stuff, I bounce from one to the other pretty regularly. I’m working on a novel, short stories, a non-fiction book that isn’t comics and isn’t prose. I feel a bit like a shark at the moment, I don’t stop moving if I can help it.

If you want to read more of Christopher Sebela’s words, don’t miss out on Pantomine #1 at your local comic book shop on November 4th!

Transmissions From The Cave: August Schedule

We are thrilled to announce, starting Wednesday, August 4th, Saige Ryan will be joining Mad Cave Studios as our new host for Transmissions from the

Beware the Moon: Wolvenheart #8 in Previews

This week, Mad Cave Studios is proud to announce, Wolvenheart is back and in previews today!
Wolvenheart’s dedication to monitoring anomalies in the space time continuum has taken an upside down turn.

The First Of Many – Maverick Launches with Needle and Thread

Mad Cave Studios’ new Young Adult line, Maverick, announces its first title, Needle & Thread. This original story is about how choosing between living the life you want and living the life you’re “supposed to” is not always an easy choice.

Miami, FL – Having trouble breaking into the comic book industry? Well you’re in luck! Mad Cave Studios is thrilled to announce for the fourth

Volume three marks the beginning of the end of the Battlecats journey. After the death of King Eramad III, Valderia bleeds as the season of Rorinhal falls upon it. Valadar has claimed the throne, and the Battlecats are fractured without their leader.

The Thrill of the Heist: Pantomime Volume 1 Release

This week, Mad Cave Studios is proud to announce, the Pantomime Trade Paperback will be released July 07, 2021! What starts as a new group of friends, evolves into a family of criminals on the hunt for a thrill.