Ah, Hollywood! Famous for celebs, sun…and murder cults! The Privy Council is the most exclusive club in town, headed by the entertainment industry’s top mogul, a ruthless exec who enlists his famous underlings to kill the people who stole from him, two local garbage men. James and Billy must survive one epic day of sword fights, forest fires, and giant mechs! At least there’s hazard pay. Collects issues #1-5.

“When I first read the Hollywood Trash script it reminded me of all those 80s and 90s movies so entertaining and with so much charisma that for me and for many they became ¨rewatchable classic movies¨. So try to print that feeling when designing the characters, both the heroes and the villain staff and the settings where all the events occurred. The story also has an air of a road movie which I am also a fan and in that aspect this project was also a challenge, I had never drawn a story that would totally turn up in one day.I really enjoyed working on this project with the great script by Stephen and the company of Chris and Jose.”
– Artist, Pablo Verdugo

“Everyone involved with HOLLYWOOD TRASH wanted to make the best action-comedy ever put to comics, and I believe we achieved that. I specifically wanted each chapter of our 5-part serial to be stand alone, so that any reader could pick up any issue at any time and feel like they got a complete adventure, that they got their money’s worth, and would want to come back for more. Having lived in Los Angeles, I intertwined my personal recollections such as the class divide and choking wildfire air, with what people normally associate Hollywood with – movie moguls and cults! I can’t say enough about the art (Pablo wants action figures of his co-creations, and I concur). The illustrations, colors and lettering pop like the gold on Rodeo Drive. Alongside our editor Chris Sanchez, I’m proud to be part of this remarkable team.”
-Writer and Co-Creator, Stephen Sonneveld 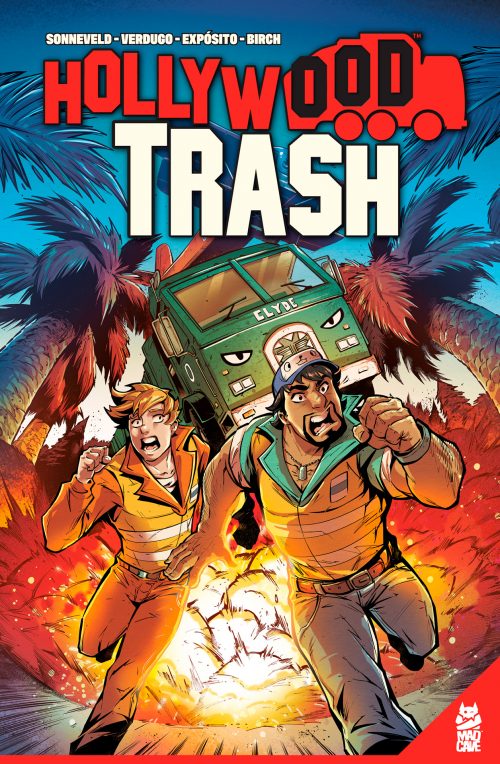 Hollywood Trash TPB will be available on May 5, 2021 and can be purchased at madcavestudios.com, Comixology, Drive-thru comics, or your local comic book shop.

Bountiful Garden Issue #1 is now available in stores! This series, which you may have started on Free Comic Book Day’s 20th Anniversary, is centered

Mad Cave is coming back to the Big Apple!

Previous Next We are happy to announce that we will be attending NYCC! 2021 marks the 4th year being back at NYCC and we will

Bringing The Story to Life: Becstar

The second volume of Honor and Curse, Mad Cave’s action-packed Shinobi tale influenced by Japanese folklore, finds Genshi Sakagura training to control his Tengu with the help of an ancient Shinto priest.

Mad Cave Studios is excited to announce our new D&D series, The Last Session. Join Jay, Lana, Drew, Walter, and Shen as they go up against some of the most puzzling monsters and life roadblocks. Dive into the game and their lives, as they discover their true friendship through Dice & Deathtraps.