Sit down with creators Charlotte Balogh, Gab Contreras, and Liana Kangas as we discuss what the Lower Your Sights project means to them, their contribution to the anthology, and their thoughts on the unifying power of art.

Q: What does this project mean to you?
A: For us, this is a project of hope and necessity. We believe the Lower Your Sights anthology is a unique opportunity for creators to put their hearts and artistic muscle behind something truly worthwhile. As an organization, Voices of Children has an exceptionally thoughtful approach to supporting those in need, and our pages are a small but mighty way to champion their efforts.

Q: What is your contribution to Lower Your Sights? (Short Story, Pinup, Etc.)
A: With our piece, Liana illustrated a spread of sunflowers to spotlight Ukraine’s national flower in a manner that is soothing and inherently hopeful. Similarly, Charlotte wrote a poem inspired by her grandmother’s childhood, seeking to remind readers to remain kind and forward-looking in the face of tragedy. And, last but not least, Gab brought the project to life as our colorist!

In addition to participating in the Lower Your Sights anthology, Liana will be raffling off the original art from our contribution to raise extra funds for Voices of Children.

Q: In addition to supplying food and essential supplies, Voices of Children also provides art therapy to help kids cope and overcome the stress, anxiety, and trauma of living in war conditions. Do you believe art has the power to heal?
A: Yes! Art is a way to connect with authenticity, share new stories, and entertain or educate audiences in equal measure. In times of crisis, creating art of any medium is how we heal, dream, grow, and learn–and we are all at our strongest when we create together.

Charlotte Lillie Balogh (she/her)
Charlotte Lillie Balogh is a queer writer and longtime superhero fanatic currently living in Los Angeles, CA. She wrote and self-published her first young-adult book PRETTY WEAPON when she herself was only sixteen years old, and soon after began attending book signings and hosting creative writing workshops at local schools; all of which fostered her interest in working with young people and writing genre stories for a YA audience. Graduating as a Remembrance Scholar from Syracuse University, CLB launched into writing for television and film by working at DC Entertainment in Los Angeles. At DC, CLB bridged the DC Creative Affairs and Warner Bros. theatrical teams on projects including SHAZAM!, BIRDS OF PREY, and WONDER WOMAN 1984. In addition to features, CLB worked on THE SEVEN MAGIC LANDS and the critically acclaimed DOOMSDAY CLOCK comic book series, plus TITANS, DOOM PATROL, and STARGIRL for television, all honing her unique perspective of story from both the Studio and Producer’s side of the table. When she’s not writing, CLB coaches women’s crew at RowLA and serves as a creative writing mentor with WriteGirl, working with young women and non-binary youth to help create the world’s next generation of real-life superheroes.

Mad Cave Studios and Voices Of Children are teaming up to publish Lower Your Sights, a graphic novel anthology, to raise awareness and proceeds for children impacted by war. Earnings from the book’s sales are going directly to the Voices of Children foundation.

Lower Your Sights is available for preorder (FOC on August 29th 2022), and officially in stores on September 14th, 2022. You can pre-order your very own copy of this benefit anthology here. 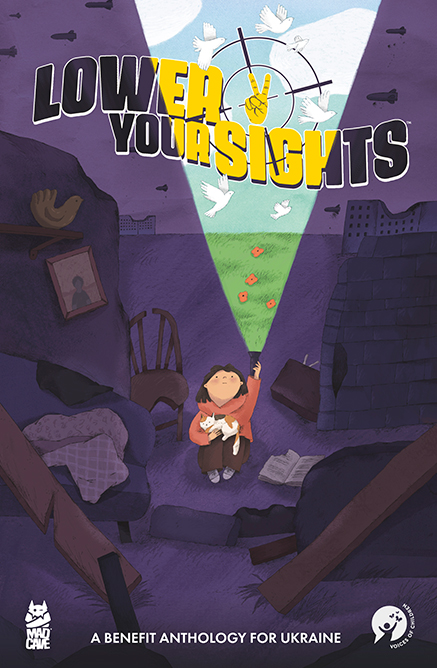 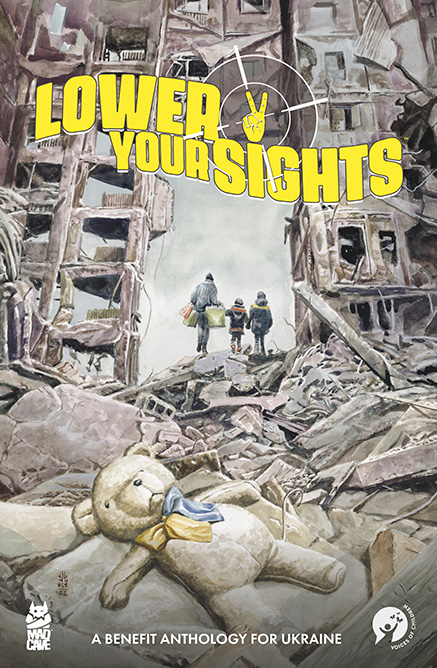 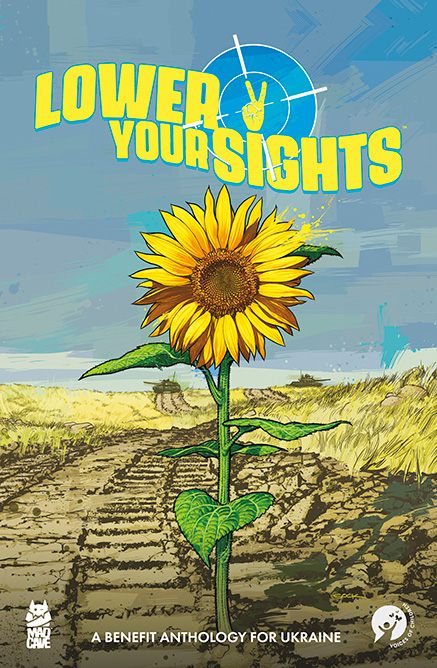