Maverick Minute: In the Shadow of the Throne Q & A

Our upcoming original graphic novel, In the Shadow of the Throne, takes readers along with Jordan to a mystical land, where he finds himself at the heart of an ancient prophecy. Dangers lurk around every corner, but with the help of Prince Astel, will Jordan be able to discover his inner truths and save Lymeira?

We had the chance to chat with author Kate Sheridan about their creative process, their upcoming projects, In the Shadow of the Throne, and more! You can check out the full interview below! 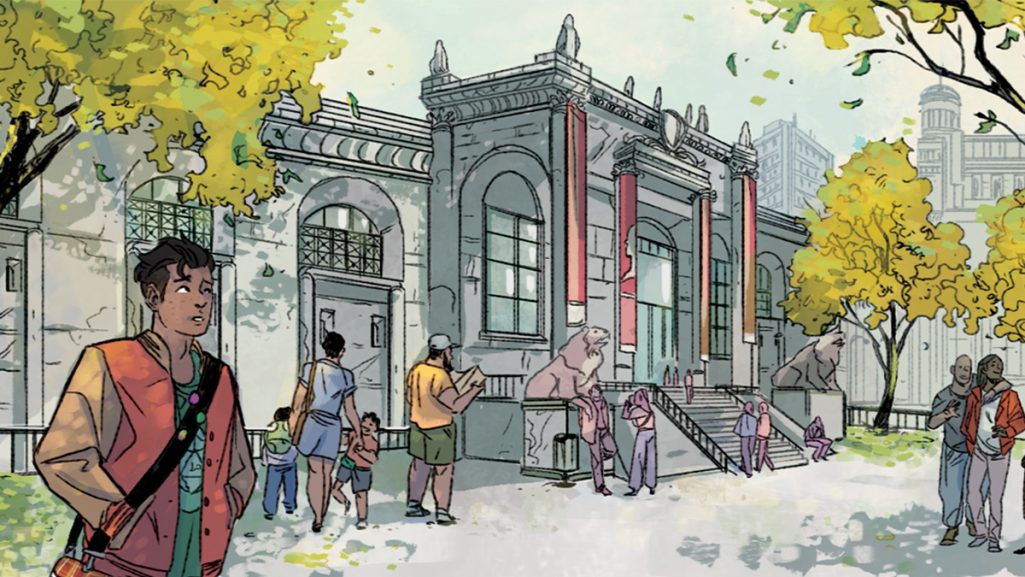 Q: Thanks so much for taking the time to answer our questions! First thing’s first, tell us a bit about yourself.

Kate: Hi there! I’m Kate Sheridan, an Eisner-nominated comic creator and illustrator living in Louisville, KY, who loves fantasy, ornithology, and the sea. I made the YA fantasy romance graphic novel In the Shadow of the Throne with artist Gaia Cardinali and letterer Micah Myers, which is being published by Mad Cave Studios in August.

Q: What was your first experience with comics?

Kate: As a reader it was probably manga! I think some of the earliest stuff I read was bits of Yu Yu Hakusho (I really loved the show), Magic Knight Rayearth, and Sugar Sugar Rune. Usually I would buy a volume or two or something and that would be the most I read of it.
As a creator, I made a very small two-page comic for my college’s yearly comics club zine in my junior year, but the first thing I really put out and sold was Fallow Time. It’s a D&D inspired short about a trio of heroines taking a rest after a battle, that I self-published in 2017 and am still really fond of. 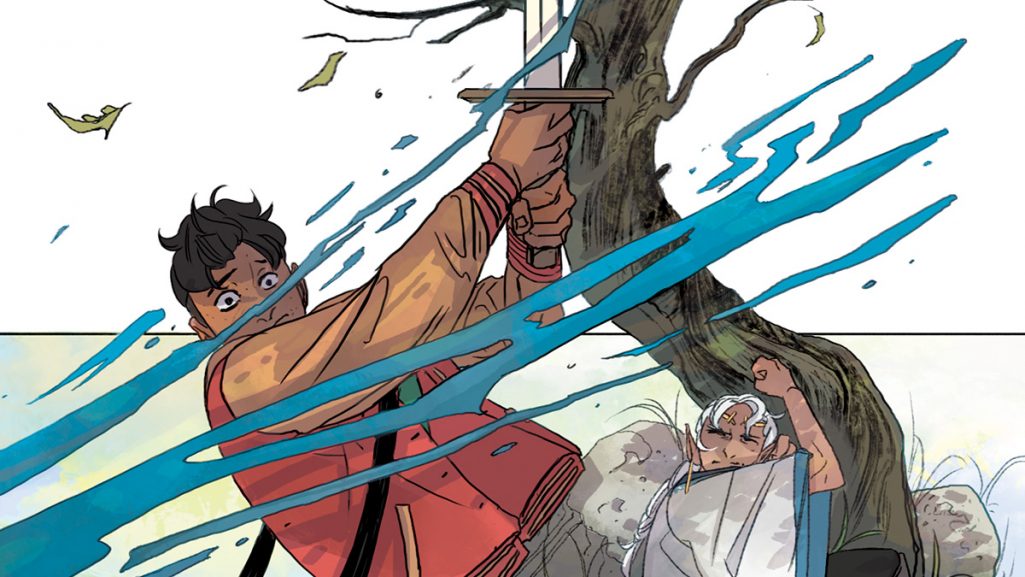 Q: What was your biggest inspiration in writing In the Shadow of the Throne?

Kate: Rayearth was definitely a starting point for me–I really wanted to give this kind of a shoujo isekai kind of feeling, while also shifting that to the lens of a gay teenage boy and bringing in more dark fantasy elements. My biggest touchstone as far as tone and worldbuilding would be Garth Nix’s The Old Kingdom trilogy, specifically Sabriel, which has been a favorite of mine since I was a teen.

Q: How did the idea for In the Shadow of the Throne come to you?

Kate: I actually was first approached by Mad Cave with a very open prompt for a gay fantasy world-traveling romance, and developed the characters and the way I would want to tell that kind of story from there. 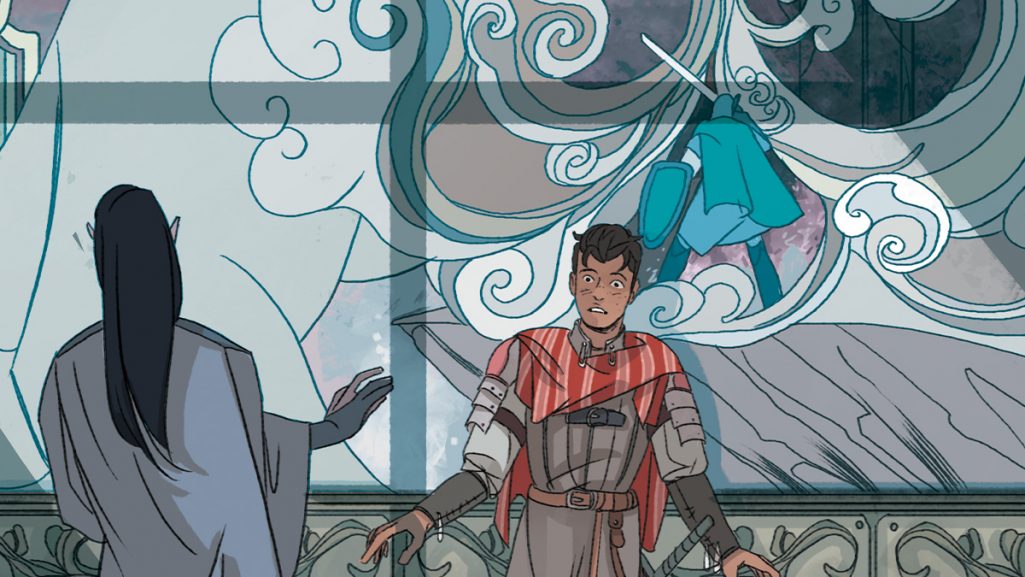 Q: In In The Shadow of the Throne, we have this amazing fantasy realm with so much backstory! What was your process in building out the world of Lymeira?

Kate: Oh thank you! For In the Shadow of the Throne I definitely started with an idea of the characters and the world followed. Jordan obviously just comes from our world, so there wasn’t a ton of building to be done there, but with Lymeira I started with Astel as a character and built out from there. A big part of that was me looking at him and just going “why are you like this?” Haha.
Astel’s relationship to magic and these family secrets that have been kept from him are the crux that Lymeira’s built around, both to explain why he is the way he is and to give him experiences that function as a foil to Jordan’s experiences with his family. I also really wanted this to be a dark fantasy world and story because I wanted Jordan to be ecstatic about his fantasy escape and then also realize that he’s bitten off a bit more than he can chew, so the dangerous aspects of Lymeira came from there.

Q: Tell us a little bit about your creative process?

Kate: I’m primarily a planner! There are things that develop unexpectedly and surprise me later on in the process, especially through discussing story beats with collaborators or editors, so generally it goes like this: after collecting research, reference, and inspiration, I file a vague idea into a short pitch, which I then build out into an summary or general outline. Next is a more detailed outline that breaks down scenes by page count, by which point most of the events are pretty set (though things might be cut or altered or moved around). Then I write out a comic script, and if I’m also doing the art for a work, I get to thumbnails, sketches, inks, letters, and finally colors.

Q: What do you hope for people to take away from reading In the Shadow of the Throne?

Kate: I think…just that life and relationships are complex in ways that aren’t easy to tease out and pick apart. Which is something I try to explore in a lot of my work! 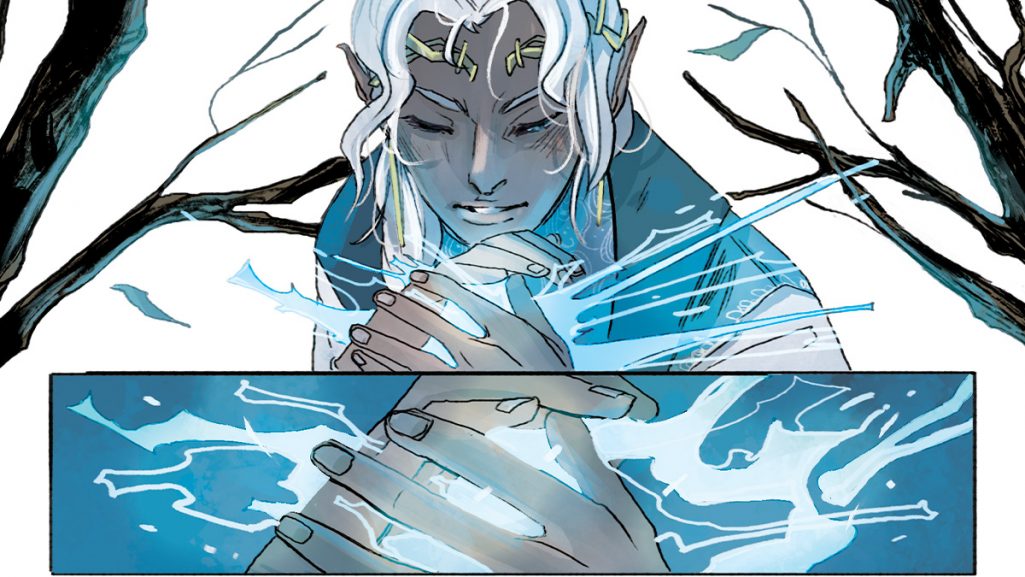 Q: What are some of your favorite stories/genres? Anything we should be catching up on?

Kate: I love fantasy! Fantasy and horror are really where my heart is.

Q: Any upcoming projects we should know about?

Kate: Right now I’m in the plotting and visual development stage of a book called Whalebones, which is an adult horror anthology comic set during the Whaling Era, in 19th century Massachusetts. It’s a weird and big book, but I’m hoping to have much more to show soon, and to maybe find it a home with a publisher.

Q: Any cons you’ll be attending in the near future?
Kate: Not at this time! 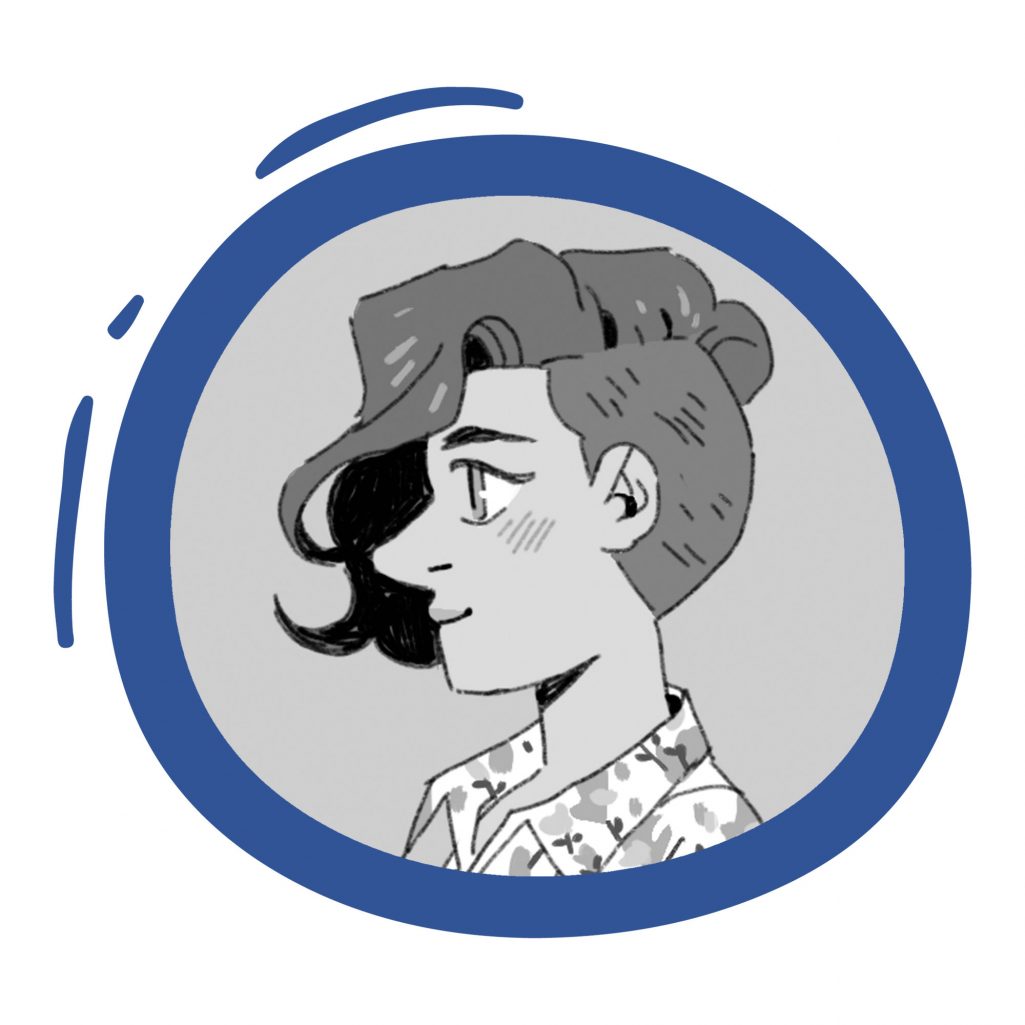 Kate Sheridan (They/She) Writer
Kate Sheridan is a nonbinary comic creator from Philadelphia. Their work has been published by BOOM! Studios, Abrams, and others, as well featured in various anthologies. They love all things fantasy and folklore, tabletop RPGs, and birds.

In the Shadow of the Throne will be released this fall at your favorite local comic shops and bookstores. Be sure to mark your calendars! The graphic novel can be purchased on Maverick’s official site, Comixology, Drive-thru comics, and your local comic book shop or book store.

Mad Cave Studios, and its imprint, Maverick, are a comic book and graphic novel publisher founded by Mark London in 2014 driven by madness and committed to quality. For additional information, visit madcavestudios.com or madcavestudios.com/maverick/

We’re pleased to announce that we’ll be attending Library Con Live with the newest addition to the Mad Cave family, Papercutz! Join us on November

Maverick is heading to the Miami Book Fair!

In The Shadow of the Throne is Now Available!

In the land of Lymeria, time threatens to reveal the throne’s dark secrets. We are pleased to announce our young adult title, In The Shadow

Paper Planes – A Story of Self-Discovery

Coming in May of 2023, we’re pleased to welcome our newest title, Paper Planes, to the Maverick family! Author Jennie Wood (A BOY LIKE ME,

School is back in session The seasons are changing, classes are starting, and we’re ready to kick the school year off to a great start!

We’re kicking off this summer with a splash! Maverick’s first-ever Summer Reading Challenge is here! For every week between July 14th and August 25th, we’ll