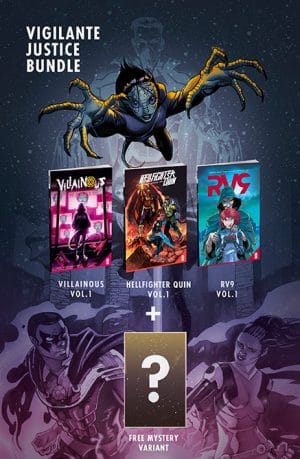 The system is never fair, and in Mad Cave’s Fight The System Bundle, you’ll see how each crew takes matters into their own hands.
Includes:

Set in Miami during its most dangerous and decadent decade, the 1980s, this coming-of-age tale follows four teens desperate to escape the drugs and violence of the city. Together, they plot a heist to steal large sums of cash from the most dangerous gang on Calle Ocho, Los Marielitos. Dry Foot is a fearless story infused with hispanic culture that deals with friendship, family, and sacrifice. Collects issues #1-4.

Haley and her brother, Max, are alone after their mother’s death and are sent to Wayfair Academy, a special needs boarding school. Eventually, they find family amongst other deaf children. One night the group decides to dip their toes into crime… the thrill is too much to leave behind. They soon find out that stealing from the wrong person, has its consequences. With no one to turn to but each other, they must make a choice, one where no one comes out the same. Collects issues #1-6.

Four greasy gutter punk teens are en route to their big show in the big apple, but when things go monstrously wrong and mutant animals are unleashed in the airport, our heroes must put on their combat boots, fly their Black Flag and survive a viral genetic mutant nightmare. Collects issues #1-5.