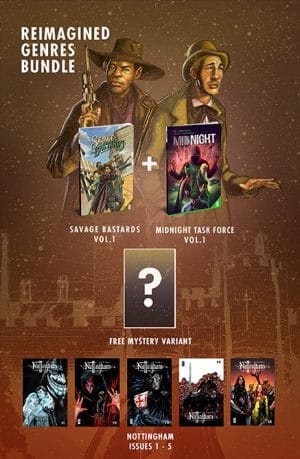 They Come at Night Bundle

A monster lurks within all of us… In Mad Cave’s Horror bundle, you’ll discover those that reject the monster within, while others embraces it.
Includes:

Led by the legendary professor Van Helsing, Wolvenheart is an organization dedicated to monitoring anomalies in the space-time continuum. After the group is infiltrated and decimated by a cabal of history’s most infamous villains, led by the most notorious serial killer of the 16th century, Elizabeth Bathory, monster hunter Sterling Cross winds up trapped in an alternate reality where his only choice is to fight his way through time and change the course of history. Collects issues #1-7.

Equal parts brutal and beautiful, Show’s End takes place in Georgia during the 1920s and follows Loralye, a 12-year-old runaway seeking refuge with a traveling group of freak show performers. At first, she isn’t welcomed for being too “ordinary.” But what her newfound family doesn’t know, is that Loralye is hiding a secret more freakish than anyone could ever imagine!