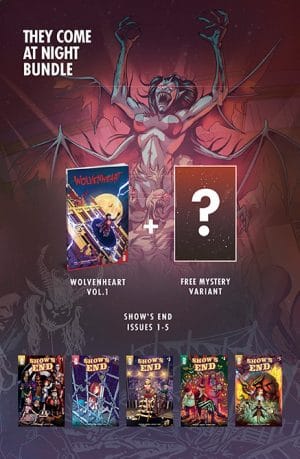 They may not be the brightst, toughest, or believe in themselves all that much, but these heroes hold their own destinies in their hands. Dive into Mad Cave’s Adventure bundle!
Includes:

Step Over the Ropes and into 1990s wrestling. Set in a fictional world, Over the Ropes dives into sports entertainment’s biggest era. A young high-flyer named Jason Lynn goes off-script in a match to win the world title and sets the southern territory on fire as the face-painted wrestler, Phoenix. Jason’s battles between the ropes are only outperformed by his struggles outside the ring. First dates. Crooked promoters. Cage matches. Factions and families. No matter what problems smack him with a steel chair, Collects issues #1-5.

Ah, Hollywood! Famous for celebs, sun…and murder cults! The Privy Council is the most exclusive club in town, headed by the entertainment industry’s top mogul, a ruthless exec who enlists his famous underlings to kill the people who stole from him, two local garbage men. James and Billy must survive one epic day of sword fights, forest fires, and giant mechs! At least there’s hazard pay.