Nottingham Vol. 1 will be going into previews June 10, 2021. This mythos tells a story of the well-known tale of Robin Hood with a dark twist, where the merry men aren’t so merry. Get ready to dive in on the Mayhem and gore, and collect issues 1-5!

In honor of the Nottingham Vol. 1 going into previews, we asked the creators their thoughts!

1. Nottingham has had some amazing covers released with this series; from the originals to variants to 2nd, 3rd, 4th, and 5th printings. Out of all these covers, which is your favorite and why?

Luca Romano: So hard to pick one. Among the variants I’m particularly fond of those that lean strongly on visual narration/symbolism, the Salomé one comes to mind, but I think my favorite remains NN#1 Variant 1: the technical skill displayed, the composition, the detail on the blade… Everything is just so good! Just an amazing piece of art. As for those by the “OG team”… damn… NN#4 second printing with our Little Skullbasher fills me with joy, but it can’t beat the NN#1 First Print: that one remains the most striking and iconic to me.

Shane Connery Volk: I had such a blast drawing every cover from the 5 originals to some of the multiple printings, but the cover to Issue 1 definitely has a special place in my heart. Not only are those masks so cool to draw, but it was my first cover ever! That’s a tough one to beat!

2. Did you ever expect Nottingham to reach a 5th printing and what were your thoughts when it was announced!

Luca Romano: “Well, that just happened” I’m honestly still in disbelief. When NN#1 first printing sold out I was beyond ecstatic. I knew David’s story was *gold* I knew Shane and I had done our best to bring it to life, but I also knew all that didn’t assure us any attention or positive engagement from the readers. Then the promos and reviews came in. Then the preorders, the variants… Every time I saw some communication by the MCS pr team (who did an excellent job!) I was floored by a new surprise. I still haven’t wrapped my head around it, but every copy sold is another person that gets to partake in our adventure, and that’s the best feeling.

Shane Connery Volk: I honestly had no idea that the series would be as big as it is. I knew we had something special happening while we were making it, but the reaction has just been mind-blowing! I can’t thank the fans of this series enough for all the love and support!

David Hazan: I think you really have to temper your expectations in this business, especially when you’re a first time creator…but when more printings kept getting announced, the confidence grew, and by the time it got to a fifth printing of the first issue, I was absolutely elated, it’s really been an escalating level of shock and validation every time a new printing has been announced.

3. Which issue was your favorite to work on and why?

Luca Romano: I have a few favorite scenes scattered around all issues, but NN#4 as a whole takes the crown for me: not only the story reaches the major turning point where the proverbial organic waste collides at high velocity with a ventilator aimed at unattentive individuals that lack the necessary means to protect themselves, but it’s possibly our peak as an art team.
I see it as our Wacken Open Air metal show: a nice setup of classics to grab the audience and pump them up, then escalating into an unrelenting, dynamic, and aggressive flow ’til the closing reveal. “Thanks for coming! See you next show!” Hell, we even have a legit “wall of death” staredown at one point, just before Marian slaying the solo (quite literally!)
Yes, the crowd scenes took forever, and we did go insane with the details, but in the end it was absolutely worth it. I’m very proud of that issue.

Shane Connery Volk: There are definitely things I love about every issue, but Issue 4 as a whole was my favourite to draw. The battle scenes were incredibly challenging, but it was all worth it in the end. I’m really proud of how that issue turned out!

David Hazan: My favourite issue to work on was issue 2. I think I had settled into my rhythm and the Sheriff’s interrogation includes a lot of the formalistic things I love about comics, and also it really gives you an honest look at our world of Nottingham when Robin isn’t around to steal (not just taxes, but also) focus.

4. With the final issue of Nottingham coming out in just a few days (July 14th), and the Vol. 1 finally being available for pre order, what has been the best feedback you have received on this series so far?

Luca Romano: Hyped for the Vol. 1! As for the feedback, the most honest answer I can give is a very personal one: the feedback that stuck with me the most was from the commenter in the last MCS showstream that said they stuck with the series because of my coloring. Now, I feel like I need to put this in perspective: I am thoroughly convinced that Nottingham would have been worth reading regardless of my colors. It’s *good*, and I would have been a fan even just as a reader myself; but all that is just according to personal taste, right? It’s a given that not everyone would appreciate David’s story or Shanes’s art as much as I did: you can’t please everyone, after all. In this light the fact that my contribution made that person read our series… it’s gratifying, you know? Like, I *did* something, my contribution had an actual significant impact. Feels good.

Shane Connery Volk:The best feedback I’ve received is how well the story and art go together. Comic books are all about collaboration! The love the whole team is getting is just amazing. Everyone at Mad Cave has been awesome to work with and I couldn’t have asked for a better creative team to be a part of!

David Hazan: The feedback for issue 4, when our story really takes a couple of huge turns, has been very overwhelmingly positive, and for that I am very grateful…that, along with the positive feedback we’ve been getting for our darker, more grounded take on Maid Marian.

COVER GALLERY
Nottingham has been jam packed with some amazing art, take a peek at all the 15+ covers and variants that have come out with the series! Tweet us on which one is your favorite cover @madcavestudios

Joe Bones – Graphic Policy
“This March, David Hazan begins a new chapter in the Robin Hood mythos with Nottingham #1. One filled with murder plots, zealous intrigue, and an element of mystery. Although the pacing of this first issue was a little slow, it picks up toward the end and it finishes with an exciting conclusion. The ending left me wanting to know more about this version of Robin Hood’s world”

Martin Sexton – Geek Vibes Nation
“I have enjoyed the many interpretations of the story of Robin Hood. From Errol Flynn, to Kevin Costner, or Cary Elwes, they were always good stories but usually the violence was toned down.[…] But not in Nottingham. The kids gloves we’re definitely removed in this version of the classic tale. Neither the Merry Men nor the Sheriff approached their business with anything less than serious intent. It is a fresh approach and works extremely well.”

Kris K. – Talking Comics
“Verdict: Buy! Nottingham manages to bring a new take on an old tale, focusing on the history and not the myth, and in doing so, elevating the narrative. A must read for the adult who grew up loving the hero.”

Andy Patch – ThePullBox.com
“This is more like a collaboration between the Brothers Grimm, Arthur Conan Doyle and Quentin Tarantino Robin Hood, with violence, political intrigue, violence, double and triple talk, and violence”

Anthony Pollock – Soda and Telepaths
“It’s a strong storyline with a voracious appetite for controlled anarchy and mayhem. David Hazan’s scripting feels well thought out and purposeful while the art is the stuff nightmares are made of. If you only pick up one Mad Cave Studios comic book series this year make sure it’s Nottingham.”

Emmett Davis – Let’s Go! Podcast
“As for Nottingham issue #1 from Mad Cave Studios, its blend of humour, blood, dialogue, and pacing make it a great first entry. I am 100% unaware of this publisher so getting a first issue to read and review is exciting.”

In this twisted medieval noir, the Sheriff of Nottingham hunts a serial killer with a penchant for tax collectors. The Sheriff’s investigation makes him the target of England’s most nefarious power-brokers. That’s to say nothing of the Merry Men, terrorists lurking amongst the trees of Sherwood, led by an enigma known only as “Hood.” 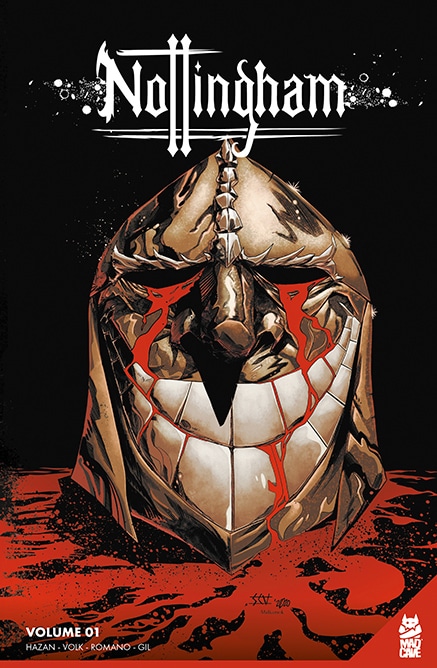 Nottingham Vol. 1 are now available for pre-order and can be purchased at madcavestudios.com, Comixology, Drive-thru comics, or your local comic book shop.

Convention season is officially in full swing! We’re thrilled to be kicking off this summer with a stop at Megacon Orlando! We’ve got a stacked

Witness the Epic Finale! Battlecats Vol. 3: Hero of Legend is available for preorder!

Valderia bleeds as Rorinhal descends upon its lands… With Valadar on the throne and the Battlecats fractured, will Valderia be able to survive it’s bloodiest

Our favorite time of year officially returned – Free Comic Book Day!We hope you enjoyed the day as much as we did. Traditionally held on

Time to take it back to the Summer of 1999! Our newest young adult graphic novel, Good Game, Well Played, is now officially available at