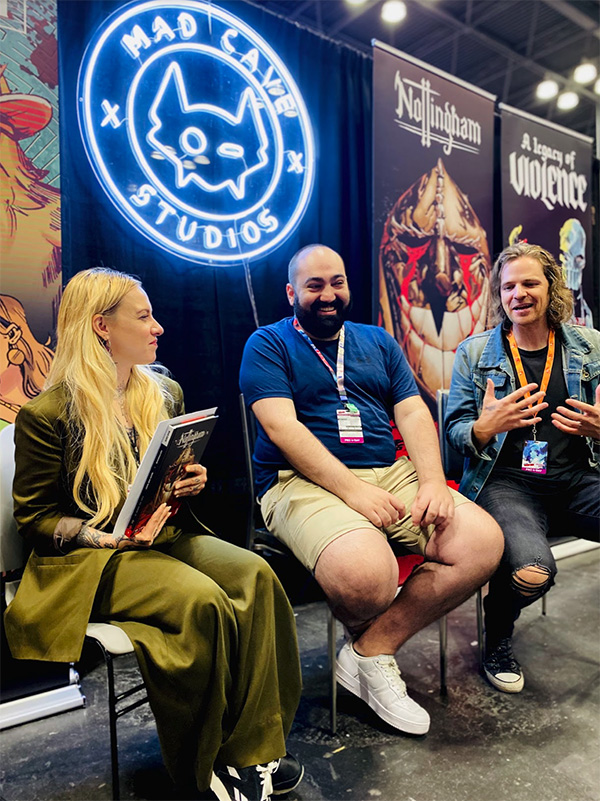 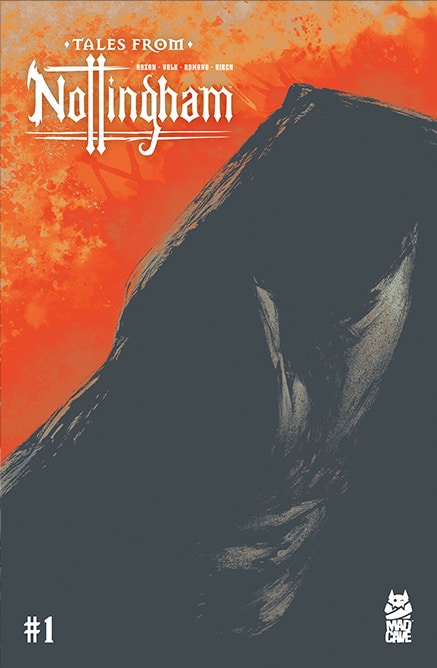 Melissa: Hi, guys! How are you doing?

Shane: It’s good to see everybody in person!

Melissa: It is good to see everybody in person.

David: It’s our first time meeting in person. We’re having a good time!

Melissa: So it feels good to be at Comic Con.

David: Yeah! For sure!

Melissa: Great! So for those who aren’t familiar with Nottingham, can you loop everybody in?

David: Sure! Nottingham is the tale of Robin Hood turned on its head. The Sheriff is the protagonist, and kind of a police procedural, where he’s trying to find a serial killer who’s been stalking the area’s tax collectors.

Melissa: Awesome! And Shane, can we talk a little about the art?

Shane: I just really approach this book from my art perspective. I wasn’t really thinking about what the book was going to be, I just wanted to draw it to the best of my ability. I have a really dark, kind of gritty style so it really just married up to David’s story very naturally. It’s very dark, very gritty, lots of blood, lots of mayhem…

Shane: And a lot of grumpy, sad people, yes.

Melissa: So how did you two originally connect?

David: We were both winners of Mad Cave’s 2019 Talent Search, and Mad Cave put us together… And Nottingham was born.

Melissa: So going back to your collaboration, can you elaborate on how that process looks?

David: I mean, it’s pretty fluid at this point. Shane and I, we’re in sync. At the start, I kind of scripted much more detail, but a lot of the detail has fallen away and I just tell Shane to do the best. I look at his very rough layouts and just go, “yes,” or, “this needs to be in here.” But, you know, it’s great. I don’t really have anything to say about our collaboration other than that its awesome.

Shane: And it’s true. I think that it was just luck of the draw that we got put together and our styles kind of married up, but we just see things very similarly. We talk character design and stuff, and we’re both like, “Yeah, that sounds really cool,” and that’s it, I guess! There’s not a lot of back and forth.

Shane: Yes! And I think, because David’s an awesome writer, we trust each other to do our thing. He brings his A-game, and I bring my A-game.

David: Yeah, and inevitably make it better– like, ten times better than it was in my head.

Shane: You hope that when it gets passed down the line to you, you’re elevating it somewhat. You don’t want to be the weak link in the chain, you know?

Melissa: But you do have a smash hit on your hands.

David: That’s what we’ve been told!

Melissa: So with Volume 1 and now Volume 2, how did those two stories connect?

David: I guess Number Two takes our characters in very different directions to where they ended in Number One. It brings in sort of new genre elements, there’s elements of westerns and adventure stories in there as well, as well as the sort of crime noir stuff we were doing in the first volume. In terms of the art, Shane’s art has just improved tenfold, as if that were even possible.

David: It has. And I’ve just been trying to keep up.

Shane: And my art is improving because every time I get a new script, its like, “Well they’re in Rome now, you have to draw these cathedrals,” and you can’t just not get better. David forces me to draw things that I would never want to draw, but then I start loving it as I get into it. Like horses and crowds!

Melissa: Like horses and crowds! So that being said, where does the creative inspiration come from?

David: For me, a lot of it is the history itself. I’ll go do a deep Wikipedia dive into the history, and pull out bits and pieces. And from there, the ideas just spring out to me.

Shane: It’s the same for me, honestly. We also didn’t know this about each other at all, but I’m a big history buff, as well, so when I saw that David was bringing in the actual history I’m like, “Okay, can I just nerd out on this?” And just the fact that I love to draw, and I get so excited when the scripts come in and immediately start thinking, “How am I going to make this work, visually?” I just get excited! I don’t need a lot of notes because it’s all there on the page.

Melissa: Very thorough! So what are some of the best moments that you’ve had working together?

David: I just love seeing those pages come in. It’s hard to pick a moment because we’ve been so distributed around the world. But, A. This weekend. It’s awesome finally getting to meet someone I’ve worked with for the past three years in person. But, beyond that, I just think that seeing the pages come in, and then seeing the colors and letters going on top is always a thrilling experience.

Shane: It’s cool for me because now that everyone wants to know what happens next in the story– so do I– I get to read it before anybody else does! And I get to see how it all plays out, so there’s moments where I’m like, “Oh man,” like, I’m shocked as a fan! Now how am I going to draw that and make it cool? Those are my favorite moments.

Melissa: So, working with Mad Cave Studios, how has the response been, in light of everything?

David: I mean, I feel very supported by the company– by Mad Cave. You know, they keep letting us make more, which is great!

Shane: It’s the ultimate compliment, they keep asking you to do more.

Shane: And they’ve been great, honestly. I’ve been very fortunate, because I do have a different kind of art style, and its gotten darker and grittier as the books have gone on. I haven’t gotten pushback from Mad Cave, no one’s really said “You’re going too far,” it’s really been– as a creator, it’s been cool do to what I do. I get to see it a certain way and put it on the page, and everyone’s like, “Great, keep running!” It’s been nice not feeling like, if I draw something where I’m like, “Ahh they’re probably not going to like that,”– you know what I mean?– and having that sort of pressure, it’s been very open. For myself, its been open to do what I want to do and have that embraced.

David: We’ve been unleashed, so to speak. It’s a very comforting thought to me that Mad Cave is like, “Just do your thing. We’ll give you money, do your thing!”

Melissa: It’s so much creative freedom and support!

Melissa: That’s awesome! So, can I get a drumroll?

Melissa: So, the big question: What is next for Nottingham?

David: Okay! So, coming next year we have an awesome anthology with some of Mad Cave’s 2021 Talent Search winners– all of them, in fact– which is very exciting! It’s called Tales of Nottingham, and we are taking constant looks at the backstories of some of the characters. Some of the stories are going to be continuations of the main series, and connections between different elements in the main series. Others are going to be sort of prequels or deep dives into characters like Tuck and Marian, and Robin himself. I’m really thankful for the opportunity to mentor some of the newer creators and sort of hand-hold them through this process because anyone who is starting out in comics, it’s a rough time often. Having that support that Mad Cave has given us, and being able to pay that forward, has been really awesome.

Melissa: So a Nottingham Anthology?

Shane: Yeah. And its cool for me to see. You know it’s characters we’ve talked about, and I designed those faces and costumes. And now you’re seeing other artists take that on, and its really cool to see. I should send apology letters to all the artists for any of the costume details that are really complex or hard to draw! I should have done that. That’s a good baptism by fire, right?

Melissa: Haha, wow! Any more hints you can drop? You gave a lot of information, I’m so excited!

David: I did. But also, Volume 3 is coming, so that’s exciting too!

Shane: We’ve got a standing rule, if Mark says it on Twitter, it’s happening.

Melissa: That’s fair because he gets all the retweets. Mark London, you are here in spirit. Just so you know. Thanks for sitting down with me, I’m so glad I finally got to meet you!